Tower Records Spotlight: Heinz - Movin' In and I'm Not A Bad Guy 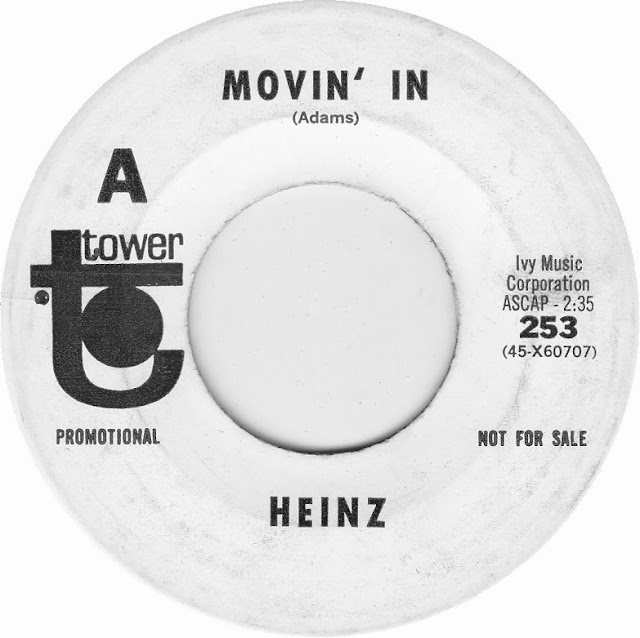 Movin' In
I'm Not A Bad Guy
The list of artists so famous, so head and shoulders above other artists that they require only one name is impressive. There is Sting. Cher. Madonna. And, of course, there is the biggest of them all...Heinz.

The professional music story of Heinz, born Heinz Burt in Germany, is inextricably intertwined with producer Joe Meek. Heinz played bass for the Joe Meek produced instrumental band, The Tornados, who struck gold in 1962 with the Meek composition, Telstar. By all accounts, Joe Meek was deeply infatuated with Heinz and decided to craft Heinz into a solo star replete with peroxide blonde pompadour, leather vests and, to paraphrase The Ruttles' Leggy Mountbatten, with some very tight trousers. 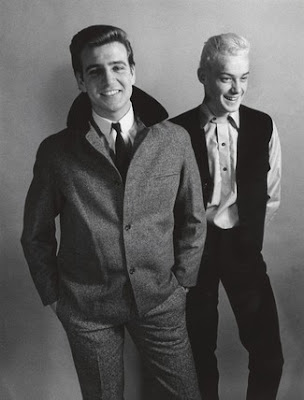 Despite some rough starts, the boys actually scored a hit in 1963 with their second single, Just Like Eddie, a tribute to Eddie Cochran. The records kept coming but the hits kept getting harder to find. Movin' In/I'm Not A Bad Guy (misprinted on the US Tower release as I'm Not A Bad Boy) was to be the last record for Heinz. Released in the Summer of '66 in both the UK and the US, the swan song of the creative duo was also their best. Not a bad way to go out. Heinz and Joe Meek would have a falling out and within a year Joe Meek would use a gun owned by Heinz to kill himself and his landlord.

Movin' In is a piece of musical brilliance. Beautifully produced by Meek, the number is driven by the chicken clucking guitar work of guitarist Barry Tomlinson. The chicken's head finally explodes into a guitar feeding frenzy at 1:15 that will make anybody stop and take notice. Tomlinson doesn't take his foot off of the chicken's throat for the remainder of the song as the song culminates with one last crow of his fuzzed out guitar. 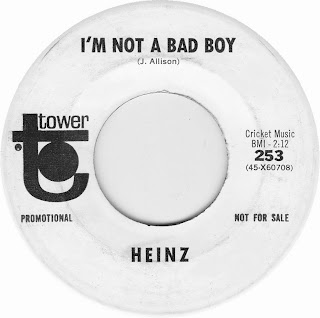 The Flip-Side is no slouch either. I'm Not A Bad Guy was written by Jerry Allison of The Crickets who released the number on Liberty in 1962. The Heinz cover removes The Crickets' Everly-like harmonies and goes straight for the darkness. According to music writer Mike Stax, the guy who turned me on to Heinz, the impressive guitar work on I'm Not A Bad Guy features none other than Ritchie Blackmore of Deep Purple fame. Blackmore goes toe to toe with Tomlinson on the lightning fast solo and the frequent fills. Now, here on one page you can play both songs and have a guitar-off to the death. Tomlinson v. Blackmore. No flipping of the record required.

Thanks to Mike Stax of Ugly Things for identifying these guitarists for me and for turning me on to Joe Meek and Heinz in the first place. I still have that cassette after 27 years! Cheers mate. I owe you a Grolsch.