Song of the Week: The Gants - Smoke Rings/Little Boy Sad 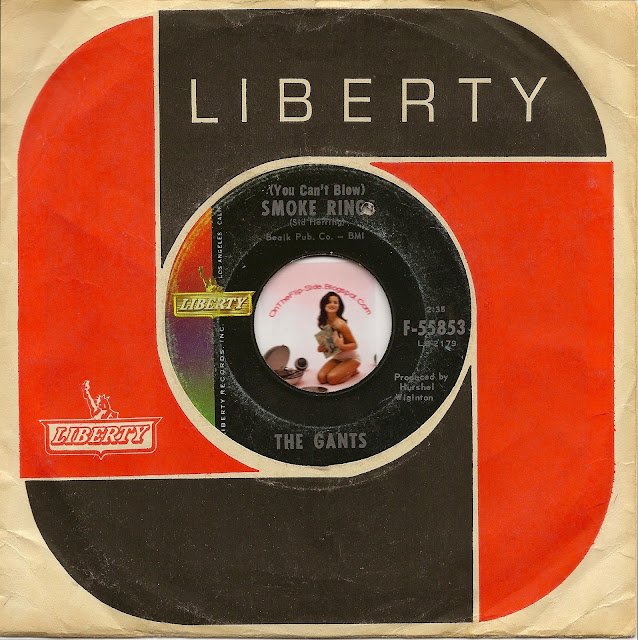 Here is a GREAT double sided single from Greenwood, Mississippi's, The Gants. The Gants were led by Sid Herring who composed the high energy Smoke Rings, the A-side of their 5th single for Liberty Records. The other cats in the band were Johnny Sanders on guitar, Vince Montogomery on bass and Don Wood on drums. The song has it all, cool guitar riff, a second guitar being run through a Leslie speaker and nice smokey vocals replete with Herring screwing up the lyrics and then laughing at himself (at 2:04).

The Flip-Side of Smoke Rings is nearly as good. That song is called Little Boy Sad. I had always assumed the Gants did the garage arrangement of the song themselves, which differs greatly from the 1961 original by Johnny Burnette (also on Liberty Records). But...sometime around 1988, I was living in Australia where I sat in a music rehearsal room in Melbourne playing Little Boy Sad on guitar. The drummer of our band, said, "hey, that's my boss' song...how do you know that?" I told him it was a Gants song. Well, long story short, his boss had once been in an Aussie 60's garage band called The M.P.D. Limited who had a hit in Australia with it in the Summer of '65. A full year before the Gants did it. And it's definitely the same, unique arrangement. In Australia I picked up the M.P.D. Limited version of the song on Go!! Records. Much to my surprise, when I returned to the US, I found a US pressing of the aussie single on LTD International Records. That must have been from where the Gants nicked it. 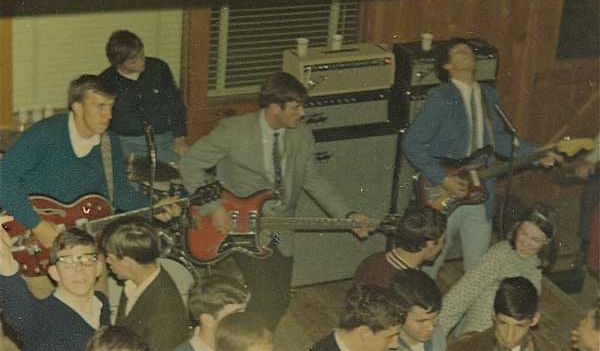 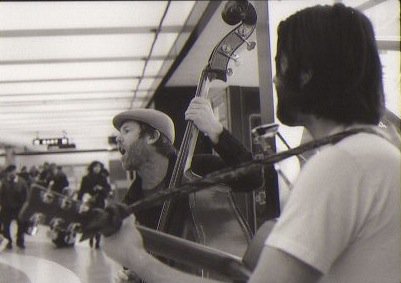 It's interesting how things come together. I first came across Zack a year or so ago during one of my lunchtime forays over at Powell St Bart station. He was playing with his band, the Jugtown Pirates. Its basically a quartet comprising of stand-up bass, mandolin, guitar and violin. Zack's on the bass and vocals, both of which he handles with ease and earnestness, and I was impressed that day with a couple songs they played written by his brother. Around the same time over at Montgomery station I started noticing Brian playing solo, usually on a new model Gretsch hollow body plugged in to a little amp. The first song I heard him play was Rocky Raccoon and his nicely controlled vocal work stood out, as did his chord range on the guitar.  Fast forward to a month or so ago and they're together at Montgomery station.  I think it's a good match.  Listen here to Hard Times written by Zack's brother.  Thanks for the music guys!
You can hear other Busker Days recordings featuring Zack and Brian here and here. 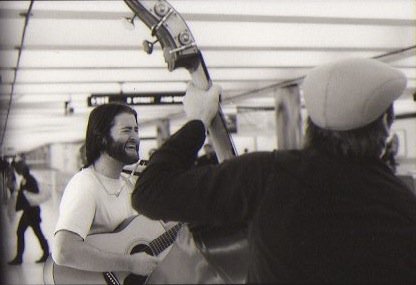 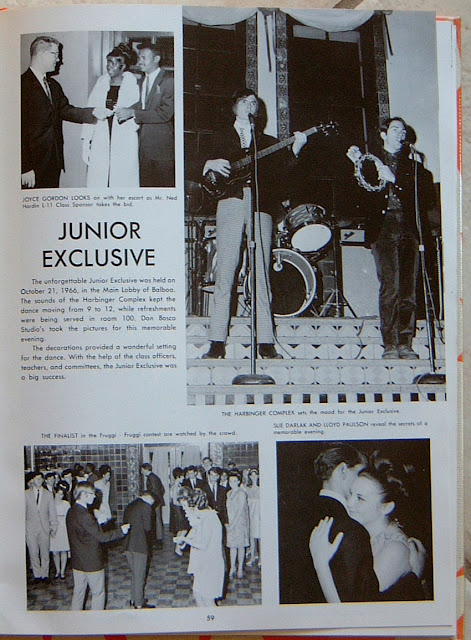 Our final day of the San Jose Suite has us crossing the city line into neighboring town, Fremont, California. Cheating, I know. But we're talking about the world's shortest drive on the 880.

The Harbinger Complex were made up of Jim Hockstaff, Ron Rotarius, Robert Hoyle, Jim Redding, and Gary Clarke. The band put out two singles on local labels and two more songs on a bay area compilation called A Pot of Flowers. Today's song, A Time To Kill, which already received a link from us in an excellent Chesterfield Kings article written by Jack Hayden for this site, was on that compilation. It's a funky little song with a palpable Byrds influence.

The very understated Time To Kill, written by Hosckstaff and Hoyle, allegedly touches on some of the thoughts Hoyle experienced upon his return from Vietnam.

Enjoy our final day's salute to San Jose (and just slightly beyond) bands. 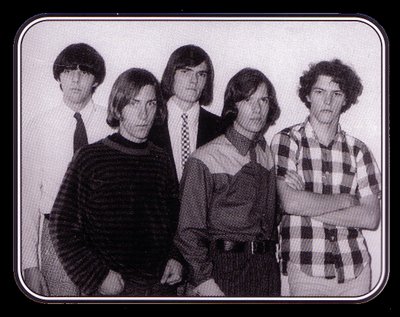 Original Song Project: Jeff Stovall - Revolution And Insomnia and Down Around 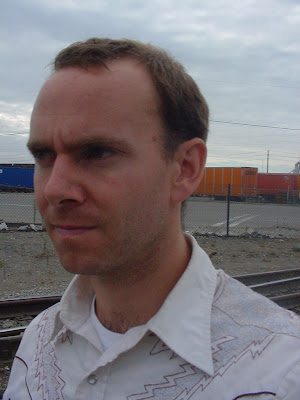 You might recall a previous installment of this project featuring a song by The Dirt Floor entitled San Joaquin.  The author of that song, Jeff Stovall, is our featured singer songwriter today. In between milking goats and pruning old ornery apple trees on his property in Willits, California, Jeff has been putting together some demos for a solo project. Today we have a couple of the demos written and performed by Jeff and presented here for your listening pleasure.  Us flipsiders are diggin' it!

You may listen to other OSP posts by clicking on the link at the Jump Station at right.  If you have some original material you think might be a good fit for Flip-side, just forward your recording to flip west or flip central and we'll get on back to you.
Posted by Flipsider at 3:56 PM 6 comments:

Email ThisBlogThis!Share to TwitterShare to FacebookShare to Pinterest
Labels: Down Around, Jeff Stovall, original song project, Revolution and Insomnia, The Dirt Floor, Willits Posted by On The Flip-Side at 3:00 PM No comments:

Song of the Week: The Merry-Go-Round -- Listen Listen/Missing You 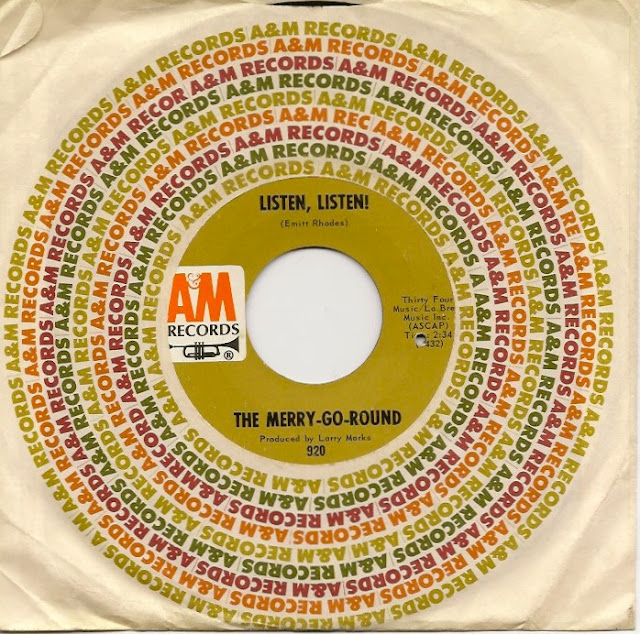 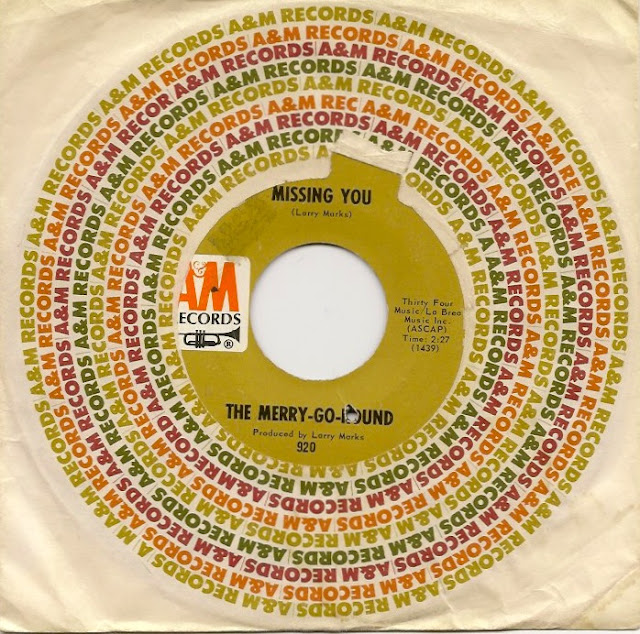 The Merry-Go-Round were fronted be teen prodigy, Emitt Rhodes. The band released six solid singles on the A&M Records label before Rhodes embarked on a solo career. None of their singles is better than this two sided gem which we present to you today.

The plug side is Listen, Listen and it was written by Rhodes. It's a bit of an anomaly for The Merry-Go-Round as it is a bonafide rocker. Not their usual forte. The Flip-Side was written by songwriter and Scooby Doo theme singer, Larry Marks. Larry Marks also did duty as the producer. Missing You remains perhaps my favorite Merry-Go-Round song of all time. Rhodes's vocals are spot on. Enjoy today's double sided gem. 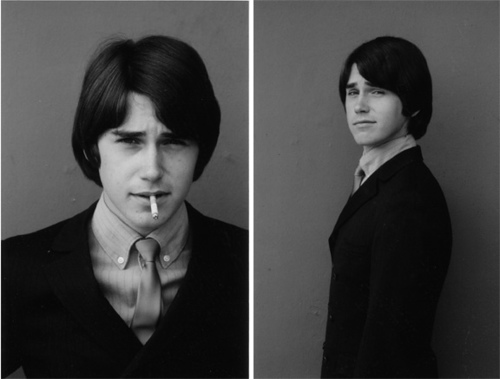 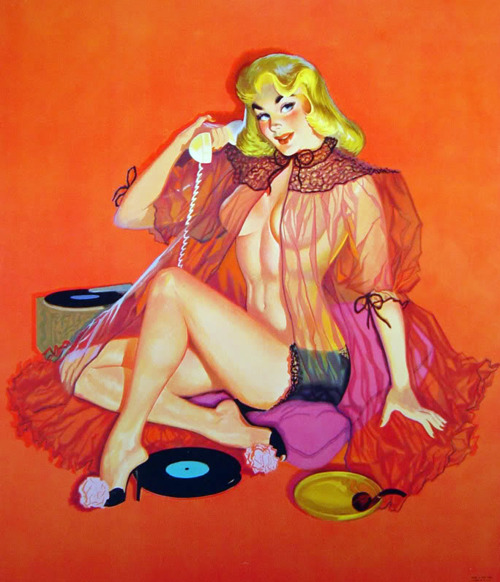 Posted by On The Flip-Side at 2:49 PM No comments: