Song of the Week: Bobby Bland -- I've Been Wrong So Long/Cry, Cry, Cry 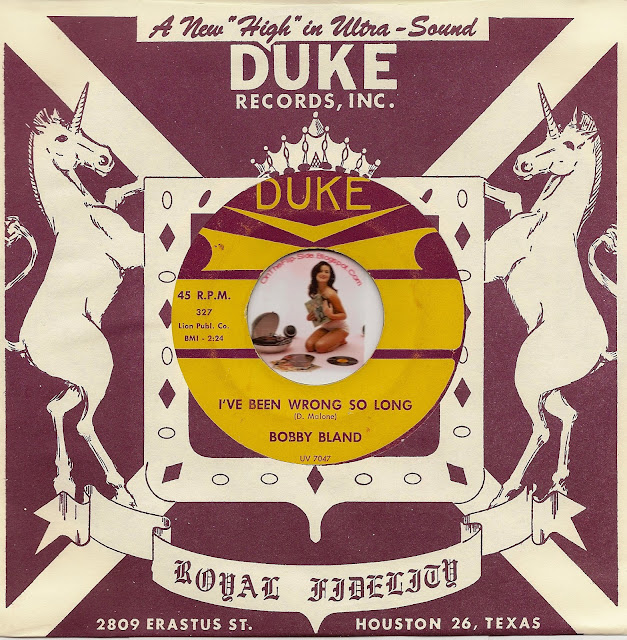 I've Been Wrong So Long

In my younger years I ran across a reprint of a Davey Jones and the Mannish Boys single. The A-Side was a decent enough song called I Pity The Fool. It grabbed my attention if for no other reason than mod kingpin, Davey Jones, would go on to fame as David Bowie, and, secondly, the song's title was the catch phrase of the criminally underrated actor, Mr T. Not long later I would find myself sifting through dusty record bins in Albany, California when I ran across the same song on a bitching looking orangey and purple label. The song was now being performed by the marketing disaster of a name, Bobby Bland. I figured it was worth the dollar being requested of me and I put it in my stack. Long story short, Bland's original kicked the butt of little Davey Jones' version of I Pity The Fool like Mr. T would kick the butts of evil South American strongmen every week on TV. I said to myself, "I pity the fool who tries to cover a Bobby Bland song, fool."

That introduction to Bobby "Blue" Bland set me to gathering his records whenever I ran across them. Soon enough I was picking up Turn On Your Love Light, which astute record collectors will recognize as a song from Them's second album. Then Stormy Monday Blues, while not the best version I had ever heard, it was clearly the version from which Them learned the staple song. Then I picked up Cry, Cry, Cry, a beautiful and nicely restrained song that showcased Bland's powerful and soulful voice as good as any song I had hear him do. But the flip-side, ahh, that flip-side, was a real head-scratcher. It was one of those songs that made me just stop and listen. It sounded so different.

The song is I've Been Wrong So Long and it is our SoTW. The cool opening guitar riff made me run to my bass and try to figure it out. But as soon as I got the bass in my hands, the song went into a very unpredictable direction. Suddenly I found myself listening to a German style polka or march. WTF just happened? Then, as I struggled to learn that, the song moved into a powerful soul ballad. Holy crow that was cool! I just love it when a song comes so far out of left field that the listener is hit with a sonic fist to the ear. That's what this song does for me.

I hope you enjoy. Until next time, We'll see you On The Flip-Side! 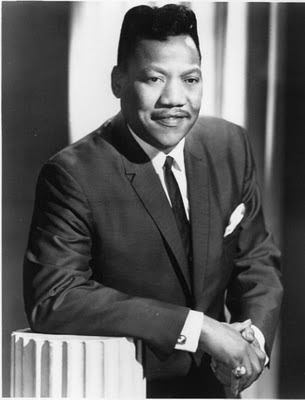 Posted by On The Flip-Side at 7:23 AM No comments:

Email ThisBlogThis!Share to TwitterShare to FacebookShare to Pinterest
Labels: Clarence Ashley, the cuckoo

Posted by On The Flip-Side at 4:37 PM No comments: 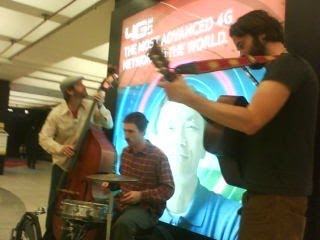 Today's recording was made a couple mornings ago at the Montgomery BART station. It was my third attempt at getting a good recording of the Baron Vines, a quartet that includes Zack on vocals and standup bass, Brian on vocals (he's on harmony on this one), guitar and harmonica, Zack's brother on banjo and Phil on drums. Zack and Brian can be heard on a previous post playing Hard Times here. I've yet to see Zack's brother but I've heard several of his compositions, including Hard Times and this weeks song, Sierra Girl. Enjoy!

So I set out to west Nevada, to my grandpa's cattle ranch
Spent my days riding fences, gave my cowboy life a chance
Then I shipped out in the 2nd war, fighting in the Guadalcanal
Lord knows I had some real hard times, but I won't talk about it anyhow

I spent some time out in Reno, oh to drink away my pain
I lost everything I own in a five card poker game
And headed for Californ-i-a, lookin' to settle down
Riding in the Sierra wind, pull into Truckee town

Song of The Week: "Just Out of Reach", The Zombies 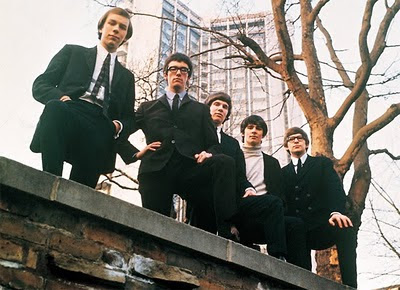 Listen - The Zombies perform Just Out of Reach
It's real hard to beat The Zombies. Song for song, they may have been the highest quality band to come out of The British Invasion. But sometimes quality isn't recognized. In a world where people gobble up Budweiser and McDonalds, the Zombies were too often selling fine wine and steaks.
In between their two excellent albums, Begin Here and Odyssey and Oracle, The five lads from St. Albans, England, ran off a streak of singles that are of the highest quality. Unfortunately, each one did as poorly as the next on the charts. Particularly in the UK where the band was, well, just ignored. Amazingly they only charted one song, their debut, She's Not There, in the UK Top 40. What the heck!? In the US they had a bit more success and influenced American acts like the Enfields, The Left Banke, and Phil and the Frantics. But in a world where Paul was the "cute one" and Mick was the "bad boy" and Eric was the "gutiar god", the nerdy looking, minor key loving Zombies, bespectacled and wearing suits, were quickly out of date and tagged as the kind of band only girls liked. But pick up any Zombies single -- any of them -- and you will pick a class-A gem. Organ and piano player, Rod Argent, gets most of the accolades for the songwriting. Well deserved too. Chris White, the bassist, was no slouch either and really grew quickly as a songwriter in their brief career. But today we look at a rare Colin Blunstone penned song.
Just Out of Reach was written by Colin for the Otto Preminger film, Bunny Lake Is Missing. It's one of three songs the Zombies contributed to the soundtrack. The song was then released in the UK as the Flip-Side to Chris White's excellent composition, Remember You. Months later, the US pressing (on Parrot Records) would promote Just Out of Reach to the A-side. In our opinion, it is the right decision.
Just Out of Reach is not only a rare Colin Blunstone composition, but it is a rare (albeit less rare) rocker. Blunstone's voice is as good as it has ever been. He has a nice rasp to it that sounds as if he was fighting a phlegmy cold. Then there is the great organ break with Rod at the fore. That last half of that lead is just magnificent. Chris White and Rod Argent lend their superlative harmonies as a call and response and as a nice ooh-ooh-ooh here and there.
Enjoy. 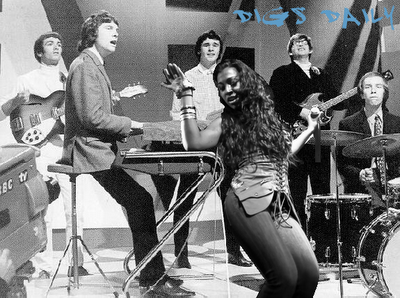 Video Diary: The Zombies "This Old Heart of Mine"

The Zombies on French TV, live. Dig that Schlitz sweatshirt Colin Blunstone is sporting. It says "Breakfast of Champions". My goodness, that man has a hell of a fine voice. Two vids here, both live. This Old Heart of Mine and Gotta Get Ahold of Myself
Posted by On The Flip-Side at 3:33 PM No comments:

Email ThisBlogThis!Share to TwitterShare to FacebookShare to Pinterest
Labels: chris white, colin blunstone, gotta get ahold of myself, hugh grundy, paul atkinson, rod argent, The Zombies, This Old Heart Of Mine

Song Of The Week: "Tattoo", The Who 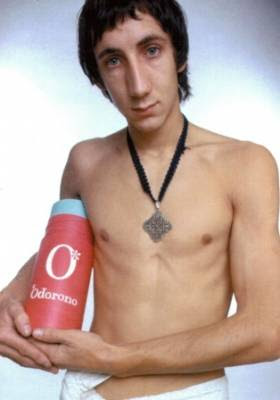 Listen - The Who perform Tattoo.
Me and my brother were talking to each other
'Bout what makes a man a man
Was it brain or brawn, or the month you were born,
We just couldn't understand

So me and my brother borrowed money from Mother
We knew what we had to do
We went downstairs, past the barber and gymnasium
And got our arms tattooed

Welcome to my life, tattoo
I'm a man now, thanks to you
I expect I'll regret you
But the skin graft man won't get you
You'll be there when I die
Tattoo

Welcome to my life, tattoo
We've a long time together, me and you
I expect I'll regret you
But the skin graft man won't get you
You'll be there when I die
Tattoo