Song of the Week: "Spanish Bombs", The Clash 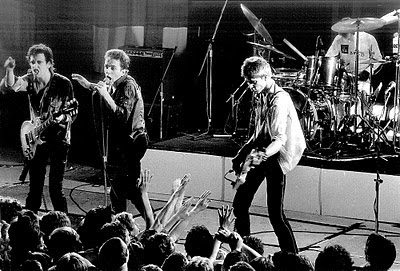 Listen - The Clash perform Spanish Bombs
Today's SOTW comes from one of, if not thee, greatest albums ever recorded: London Calling. The song is the Joe Strummer composed Spanish Bombs, a song about the Spanish Civil War. As I listened to this album (yet again) over the weekend, I couldn't help but to be struck by the diversity of subjects covered in the lyrics and evident in the music composition. From Spanish Bombs to Wrong 'em Boyo to The Right Profile, Mick Jones and Strummer (mostly Strummer, in this writer's opinion) made one of those massive growth spurts as a writer. The kind that is so gigantic that one has to slap their head and just sit back and say "wow". The two front men had shown great songwriting on their first two albums, the angry The Clash and the spotty Give 'Em Enough Rope, but nothing that even comes close to the variety and complexity of their third album, London Calling.
On Spanish Bombs Joe Strummer fronts the song with his gravely voice, singing of the republican freedom fighters who fought against the fascist forces of Franco:

Spanish songs in Andalucia, the shooting sites in the days of '39. Oh please, leave the ventana open, Federico Lorca, dead and gone.

Mick Jones sings beautiful harmonies and interjects with interplay, often in Spanish.
Brilliant song, brilliant album.
Enjoy.
Posted by On The Flip-Side at 12:35 PM No comments:

Song of the Week: "Done Somebody Wrong", Elmore James 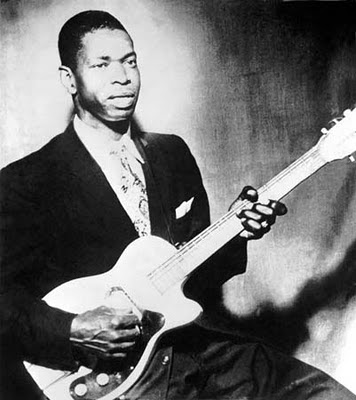 Elmore James is the man. It doesn't take much more than that to describe James and his great, great recordings. Back in about 1983 or 1984, I was preaching the gospel of the Yardbirds like an itinerant preacher possessed by the big man himself. Then a kid from school named Justin Hibbard came up to me in the halls of our high school. He looked like the crazed preacher I looked like. "Have you ever heard of Elmore James?", he asked. "It's where The Yardbirds got everything. I was going through my dad's record collection and found a record of Elmore James and John Brim. It's great."

These were fighting words, but his invitation to come by after school to hear the record he was carrying down from the musical Mount Sinai eased my anger. He was right. On every count. In fact, today's SOTW, is one of those songs from which The Yardbirds, shall we say, "found inspiration." The song is Done Somebody Wrong and it features the patented Elmore James kick ass slide guitar for which he is so famous. In fact, his fame as a slide guitarist can sometimes irk me. Not because he wasn't a great guitarist. Nope. It's more that James is such a huge figure in post war blues slide guitar -- defining the new electric tone and the new electrified attack -- that listeners too often miss his extremely great voice. His gravel voice matches the tone of his electrified Kay hollow body flat top guitar beautifully. Just the way Elmore James says "Oh Yeah" makes me happy. As he finishes his sentence, his guitar responds. Together they fill out a song as nicely as Bettie Page filled out a sweater. Listen as Elmore fills in grunts and moans to match his guitar in the last verse, and then again in the outro lead. Two instruments harmonizing perfectly in concert. I particularly like it as he finishes the first sentence and throws in an "uh" to match his guitar dropping down. 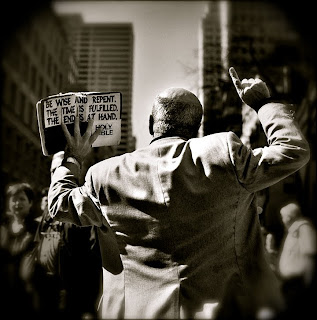 Hello again flip-side. We are back. We are The Itinerants. Remember? You remember us maybe from the last song you published for us last year on your web page? That song was God's Crooked Smile, a song about a Godless killer who sinned and is now looking at a reckoning. We were real pleased with the words we got back from that song. Thanks.

Here is a new song that my brother, Jeremiah McCloskey, wrote and does the singing on. The song is called Vague Memories and is about our growing up in the hills in Omanik Maod, Georgia where we now have our Pentecostal church that we are real proud of. This song was recorded in the church and has the same music players as the last song. Jeremiah plays acoustic guitar and harmonica. I play some other stuff and Mrs. Kay plays bass. Our drummer didn't show up this day.

I hope your listeners might find their way to our church and join us for a song on a Sunday. One showed up not long after our last song was published. But he smoked so we had to ask him to leave. So if you show up this time, don't smoke. Or don't drink none neither.

With respect and God's love, Hollerin' Hank!
Posted by On The Flip-Side at 12:32 PM 6 comments: 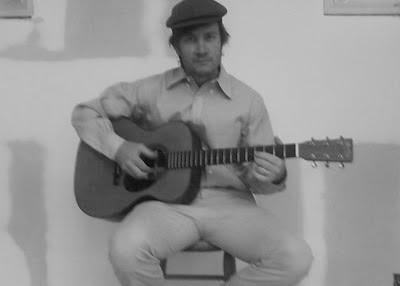 I recorded this song about a year ago. It's in an open tuning. Hope you enjoy! 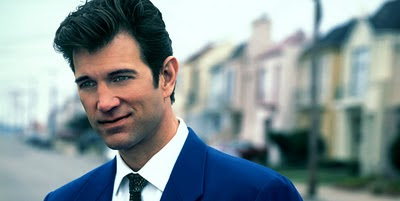 Listen - Chris Isaak performs Nothing's Changed
Sometimes I have thought I was born in the wrong year. So many of my musical, design and fashion sensibilities seem to have often been stuck in a different time. Maybe a different place too. I should have been standing on the Sunset Strip the first time Arthur Lee and Love performed at the Whiskey. Or maybe I should have been at the Crawdaddy Club in london when the Yardbirds took over a residency from the Rolling Stones. Sometimes those feelings can make for a sad and lonely Mr. Flip. Like when I awoke from a wondrous dream in which I had been at the Monterey Pop Festival only to realize, that, no, I was still in a small apartment in Providence, Rhode Island and Candlebox had a hit on the radio. Then, every once in a blue moon you meet someone for the first time that you think might just feel the same way as you do. You'll never have a friendship with them, and may never see them again, but at least their is someone else out there that thinks like you.
That was what happened the other night when a generous friend of mine introduced me to Chris Isaak. I had long followed Isaak's music (I hadn't realized how long until I really sat down to think about it) and had seen him perform live a few times. It was, however, the first chance I had to make his acquaintance. I'm not going to make too much of our cursory time together (other than to say that it was awkward when he asked for my autograph on his chest and wanted to take his picture with me...it feels so invasive to always have to do that!). But I will say, that I got that feeling of someone else who also felt as if they are of a different time. Chris Isaak exudes it in his dress, his mannerisms and his music. But, and this is a big but, his music is not so rooted in the past that it becomes a song of the past in the instant that it is born. Instead, Isaak seems to walk that beautiful and difficult line that divides tipping his pompadour to the music of Elvis, Roy Orbison and Conway Twitty and putting out fresh, original music. It's not so time out of place as it is timeless. Not everyone can do it.
Today's SOTW comes from Isaak's 1989 breakout album, Heart Shaped World. The album was recorded with the extremely lyrical guitarist, James Wilsey, who would soon leave the band, drummer Kenny Dale Johnson and bassist Rowland Salley. The latter two are still with Isaak, which says a lot about all of the men and the music. The song is the gentle and beautifully restrained Nothing's Changed. The title of which seems rather symbolic of the theme of today's article.

Enjoy Chris Isaak & Silvertone performing Nothing's Changed.
Posted by On The Flip-Side at 12:29 PM No comments: