Song of the Week: "Inside-Looking Out", The Animals 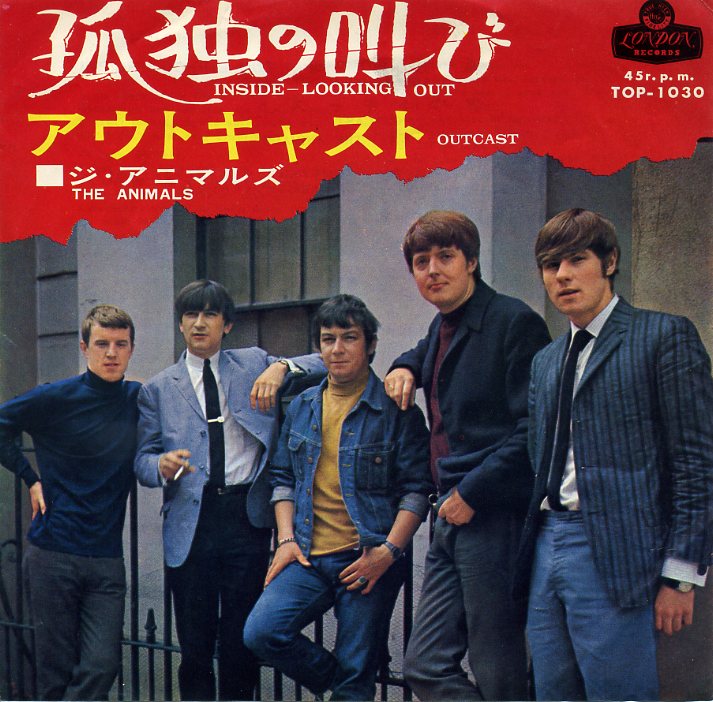 The last Song of the Week for the decade! And without doubt or hesitation or even a semblance of second guessing, I can tell you emphatically that our SOTW, this week, is my favorite Animals song ever. It is, I dare say, a perfect song. The song is called Inside-Looking Out and was recorded for Decca Records in 1966.

Let me tell you how I came to this song. Back in my high school days (or more likely shortly thereafter) in the 80s, I went out to a party with some of my lesser quality friends. The party was a dud and I sat in the living room with my mates picking through our hosts' father's records. As was always the case back then, it was a repository of 60's dinosaurs, and a few faded 70's soft rock records. I don't really recall, but he probably had the typical crappy Herb Alpert albums (though I always linger of the Whip Cream and Other Delights album cover) and the Herman and the Hermits dung heaps. But one could usually still find a good album like a Ray Charles or The Beatles Rubber Soul album. On this particular night, we ran across the US pressing of The Animals' Animalization album. I'm sure that in our always diplomatic way, we yanked off a Duran Duran or Howard Jones album and stuck this on. Just what the teens of the 80's wanted to listen to, right? Well, skip ahead a few hours and this album somehow ended up in the car with us as a newly adopted record. Liberated from it's lesser cousins in this forgotten stack and given a rebirth on a Marantz turntable just a few short blocks away. At home I was able to understand just how damn good this record was. Don't Bring Me Down and See See Rider as the first listen stand-outs. About the same time I picked up my newest issue of Ugly Things, the Mike Stax published fanzine. This would have been something like issue No. 3. In the back, Stax had a Top 10 list of songs that he was digging. One of them was...Inside-looking Out. So I put it on and gave it another listen. Who doggie. That is one hot number.

Inside-Looking Out was recorded as a stunning double sided single in the UK (the uber cool Outcast is the flip-side) and appeared in the US on Animalization and as a single where it flopped like New Coke. It's one of the last recordings with original drummer John Steel and well after band leader and organ player phenom Alan Price had left the band to be replaced by Dave Rowberry. The song was written by the Lomax brothers with Eric Burdon and bassist Chas Chandler. It tells the tale of an incarcerated man who keeps his will to live by dreaming of the day he will be released and, like the record I had in my hand, given a rebirth to live again.

Ice cold waters running in my brain/and they drag me back to work again. Pains and blisters on my minds and my hands. From living daily with those canvas bags/thoughts of freedom they're driving me wild/and I'll be happy like a new born child. We'll be together, girl, you wait and see/no more walls keep your love from me.

Montreal's The Haunted deliver one of the most infectious grooves to come out of the 60's garage scene. This is a different version than I've heard, with the organ here doing the main riff sans guitar and the recurring single guitar strum more prominent and chimey.
Posted by Flipsider at 8:02 AM No comments: 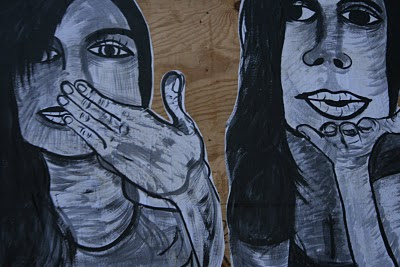 If you were like me, when Flip-Side Central announced its first anniversary, you quietly clicked play, lit a single candle, listened with a grateful smile, then blew out that candle and wished for many more insightful posts. But, you were also acutely aware that Flip-Side West's Busker Day first anniversary fell on a different date (somewhere in December). Yes, this is the moment some of you were waiting for: Flip-Side's first anniversary celebration of street musicians everywhere as Busker Days turns one !

You may recall that in the very first Busker Day post I mention a busker singing a song in tagalog, the official language of the Phillipines. The busker's name is Reuben, a very kind man who, with harp braced and ready, puts his songs out in a wide arc and very emphatically. You might also recall that I mention in the comments to that post that I play harmonica with him on his rendition of Blowin' In The Wind. Well, today we reach deep in the archives to pull out each of those tracks. 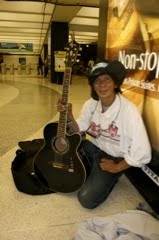 The first track, whose title I've translated as Anok (accent second syllable), was apparently a very big hit in the Phillipines. It tells of a young man who has tried to stay on a good path but has gone astray, fallen to drugs and ended in prison. In total despair, all he can do is cry for his mother, and his mother cries in return. If anyone knows more about this song, please join in below.

Blowin' In The Wind needs no introduction. Avid fans will recall that I pulled my G harp out at Reuben's request and joined him. You might also notice that I'm with him on the chorus too.

From 1939, Django Reinhardt and Stephane Grappelli.
Posted by On The Flip-Side at 8:09 AM 3 comments: 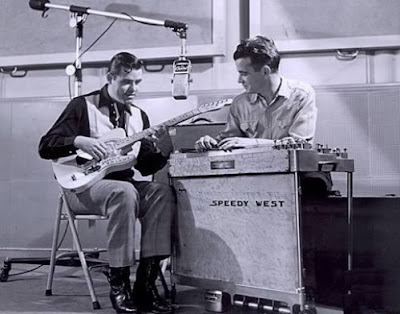 {right click here to listen to our SoTW in another window while you read this article}
Today the giant imaginary finger that floats high in the sky and gently descends on our computer to pick the Flip-Side Song of the Week, has landed ever so deftly on a Capitol Records number from 1954. The song is from country guitarist and session-man whiz, Jimmy Bryant and his willing cohort, pedal steel player, Speedy West.
The two head spinning musicians worked together like two conjoined twins in a freak show carnival. These two cats were doing something so incredibly different from everyone else, that it is a wonder the two of them coexisted at the same time. While they are both "country musicians", a quick listen to our SoTW, Stratosphere Boogie, will tell you that they were traveling far from the traditional country idiom.
Jimmy Bryant was born in rural Georgia where he used to play fiddle as a kid. He served in the Army in the European theatre during WWII until he was injured and sent back to Washington DC to convalesce. He brought back with him a bunch of shrapnel and a few gypsy jazz records by Django Reinhardt. He took up guitar and a year later, in 1946, moved to LA to become a session guitarist. Yep, one year on guitar and he became a session musician blending his native country music with the gypsy jazz of Reinhardt and the be-bop jazz so popular in Washington DC (Duke Ellington being a native). Speedy West was born and raised in Missouri while being spoon fed a steady diet of hillbilly music. Like Bryant, he moved to LA in 1946 to make his mark as a session man. Both men met while playing on the same night in neighboring clubs and peeking in on each other to check out the competition. They would also start to run into each other when two local would-be guitar makers started seeking out the young and innovative West and Bryant to demo their newest equipment. Those two luthiers to-be were Paul Bigsby and Leo Fender. When Speedy turned a few heads on a 1950 session backing Tennessee Ernie Ford while using his new Bigsby triple neck pedal steel, Speedy cashed in on his new-found reputation to suggest that future sessions include Jimmy Bryant, who was one of the first, if not the only guitarist playing a new Fender Broadcaster (later renamed the Telecaster). And so it was, the two did sessions backing singers like Ford and Kay Starr as well as recording their own instrumental albums as Speedy West and Jimmy Bryant.
Today's SoTW is one of those. It is a Bryant composition entitled Stratosphere Boogie. And as the name implies (and I have already hinted at), the song soars far beyond any country restraints. It features West and Bryant sharing a single microphone placed in between their instruments and riffing back and forth with spacey pedal steel riffs and mind blowing jazzy guitar runs. The unique recordings of the two would go on to influence a new generation of guitarists such as Danny Gatton and Bill Kirchen who would blend Jazz and country into a fusion they would wryly call Jazzabilly.
As a bonus, I'm linking here a video of Speedy West and Jimmy Bryant backing up Tennessee Ernie Ford on Kissing Bug Boogie. I own this song on a 78rpm record and I must say the first time I played it on my old Victrola I did an about face when I got to the Bryant and then West leads. They sounded so modern and so ahead of their time that I couldn't believe it was coming out of a 70 year old Victrola. Watch the video and I think you'll agree, the whiz session men were clearly destined to be conjoined in a different stratosphere.
Enjoy your week and keep flippin' like a flag on a pole.
Posted by On The Flip-Side at 2:47 PM 1 comment:

I don't know how anybody could have the blues if they owned a blue leather guitar protector with their own name on it...and wore a matching suit to boot. One of my all time favorite songs.
Posted by On The Flip-Side at 8:37 AM 2 comments: