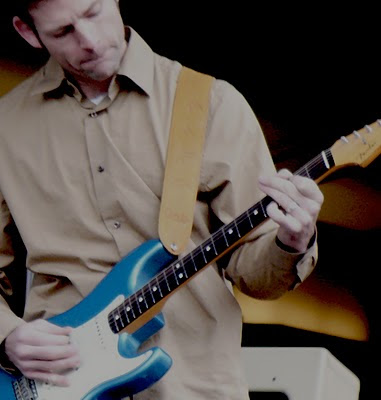 {right click here to listen to John Lawrence's song}
Hot Air is a song with early Soundgarden and Led Zeppelin influences. I wanted to create something heavy and very guitar based. This was also an experiment in creating a full song with my Mac.
If you are interested in the recording part: I created the song using Apple’s Garage Band software. First, I set the beat using the built-in metronome and a Korg Nano Key keyboard ($50 Best Buy). The keyboard is recognized by Garage Band when you plug it in using a USB cable. I layed down the snare, then the kick drum. Using the keyboard, I lowered the sound of the drums by one octave, making them sound more authentic. I recorded the guitar by plugging straight into my Mac Book Pro using a ¼ inch to mini adapter (not the cleanest way but least expensive).
I practiced a bit, then layed down each of the two guitar tracks in one take each. This gives it more of a live feel, even if it’s sloppy in places.
I chose a grunge sound for the rhythm and a heavy blues sound for the lead. After guitars, I layed down the bass using the keyboard and the “muted electric bass” selection. Cymbals came last. I recorded them one at a time with the Korg. I went back and added a little reverb to the lead guitar and the snare drum to give the tune a little more atmosphere.
Hope you enjoy it.
John Lawrence
AKA Johnny Blue
Posted by On The Flip-Side at 9:09 AM 3 comments:

Song of the Week: The Pretty Things - My Time 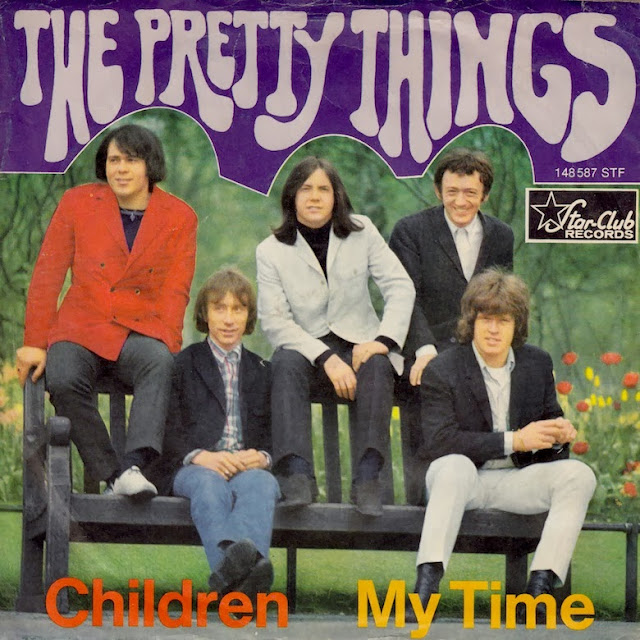 The Pretty Things were an enigma. Any garage fan knows them and knows them well. Their reputation among that crowd as an inventive and wild, pounding UK band that produced songs that could peel paint off of a wall is well earned. Songs like Rosalyn, Don't Bring Me Down, Come See Me and Midnight to Six Man (see video below) secured that reputation in stone. But ask anyone else, "what'cha think of the Pretty Things?" and you are going to receive a look as desolate and unforgiving as the Sahara desert itself. 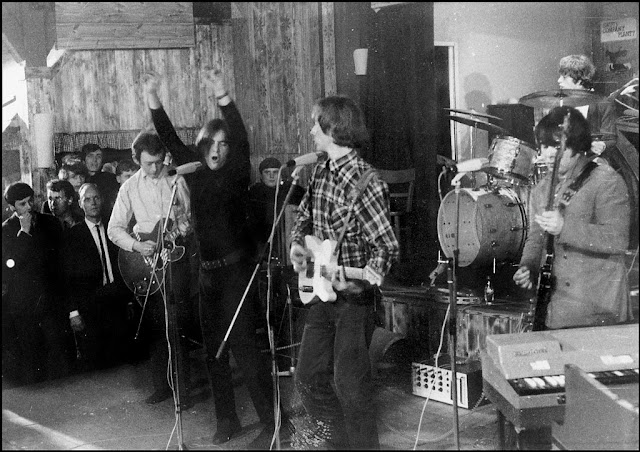 The band bubbled up in London in 1964 after Dick Taylor left his night job as the Rolling Stones bassist to form his own group where he would allow himself to play lead guitar. Taylor and raspy throated singer Phil May would front the beat band infamous for stage shows of debauchery and drunken punch-ups in any number of far away countries. It was an act that would win mostly male fans and influence numerous other bands in countries like Holland, Sweden, Germany and Australia. In America, they did nothing. Barely even got a label to release their stuff. By 1967, like so many other British bands (The Yardbirds and the Zombies come to mind), the band began to shows signs of buckling under the pressure of constant touring and recording and generally bad management. And on that last point, following the success of Sgt. Peppers by the Beatles, The Pretty Things management decided the blues based band needed to do a big production psychedelic album. Oh Joy. That album is the over produced, string-laden, gimmick filled Emotions. I'll be honest with you, it's not my favorite album. But it does have some gems. And one of those gems is today's SOTW. The song is the last song on the album and it is the wonderfully understated My Time, a band composition. The song finds the band exploring pop sensibilities and, unlike much of the rest of the album, the horn arrangement is tasteful and appropriately used as ambience. Taylor's restrained but driving guitar work is front and center and John Stax's bass work (particularly at the end of the song) adds a wonderful dynamic to the song. And of course, their is Phil May's quizzical vocals that question the path he is on.

It's not the wild raver the band was known for, but, in my opinion, that is one of the reasons it works so well. Enjoy The Pretty Things performing My Time.

And here is a video of them on German TV performing (live) Midnight To Six Man.

Have a great week.
Posted by On The Flip-Side at 8:22 AM No comments:

Last week's Video Diary was a gift for our 18 followers in Indonesia. If you haven't had a chance to see that video by the Tielman Brothers, do yourself a favor and check it out now. Even if you are not from, nor have you ever visited the island nation of Indonesia, we think you'll appreciate it. This week we follow the currents to the north west of Indonesia and celebrate our 2 followers in India. From 1965, deep inside Bollywood, we present this week to you the beautifully strange, Jaan Pehechaan Ho, as performed by the always enigmatic Mohammed Rafi.
When I say this to you, please know that we mean it with all of our flip-sidey heart: Have a good time, all of the time.
See you on the Flip-Side and एक अच्छा सप्ताहांत है
Posted by On The Flip-Side at 8:38 AM 2 comments:

So it would seem that we're huge in Indonesia. Yep, a quick look at our "hit registry" reveals that On The Flip-Side has multiple hits from Siberia, Croatia, Iceland and even New Caledonia (we had to get the Atlas out for that one). But it's our brothers and sisters in Indonesia that we are giving some love to today with a video of one of their own. The Tielman Brothers hailed from Semarang, Indonesia and, starting in 1957, began performing together as a rock band. They soon moved to Holland (where all budding rock stars aspire to move one day) and became exposed to a larger audience. Today's Video Diary captures the Tielman Brothers on Dutch TV around 1960. Here they perform their original composition, Rollin' Rock. Enjoy the weekend my friends. Particularly you cats in Indonesia.
Melakukan hal-hal besar.
See you on the flip-side.
Posted by On The Flip-Side at 8:07 AM 4 comments:

The man says it all.
Posted by On The Flip-Side at 8:36 AM No comments:

One of Ernest Tubbs' bestest songs. I particularly love the musicianship of guitarist Leon Rhodes and check out the lapsteel player, Buddy Emmons. What a great look he gives the camera at the beginning of his lead. Me thinks that he did okay with the ladies.
Posted by On The Flip-Side at 10:33 AM 1 comment: 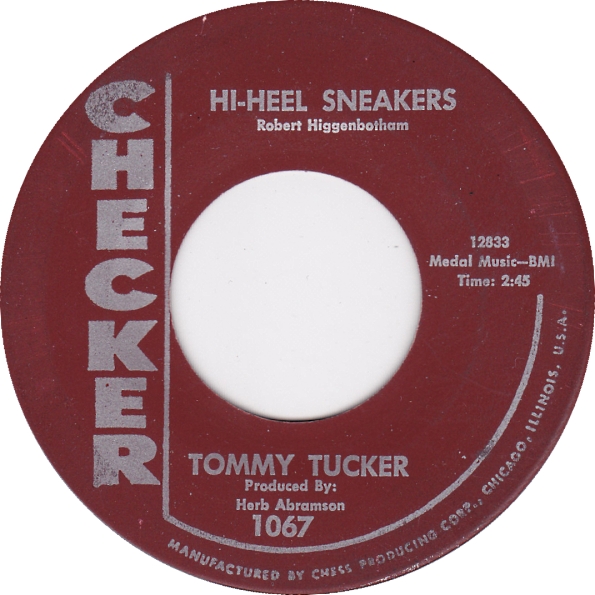 Tommy Tucker was one cool dude. That's for sure. The organ player from Ohio penned this week's SOTW, the sublimely mellow Hi-Heel Sneakers, in 1964. It became a pretty darn big hit for Chicago based Checker Records (a subsidiary of Chess Records) that year, but Tucker wouldn't have another like it. He apparently quit music and became a Real Estate agent in New Jersey. Ouch. 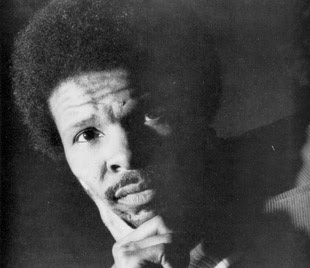 We're not positive who The guitar work by Dean Welton Young plays the is beautifully understated. guitar on this, but we are guessing it is Jimmy Reed's right-hand-man, Eddie Taylor. It has that same never break a sweat nor waste a note approach that never grows outdated. Taylor played so well. If you know who plays guitar on this, please let us know in the comment section below.

Cheers me flip-sidey friends. Put on your hi-heel sneakers and your wig-hat upon your head. Don't forget the red dress and the boxing gloves, in case some fool my want to start a fight.

We'll see you on the Flip-Side