Lost in the shuffle of the deaths last week of Farah Fawcett and Michael Jackson was the news of the passing of Sky Saxon. Sky Saxon, (born Richard Marsh) was the leader of an LA band called The Seeds that made a name for themselves between 1965 and 1970, most notably with their hard-pounding regional hit, Pushin' Too Hard. The band broke new ground with their music and -- unlike many of their compatriots of the day -- did some wonderful album length work (most notably on their first two albums for GNP-Crescendo) despite musical talent limitations. Saxon was a relentless promoter and an early advocate of "flower power" (in fact, he is likely the person who coined the term). I had the opportunity to meet Saxon (and his Scotty dog, Beamus) in the mid 80s and will just say that it was an interesting experience. Here is to hoping that Saxon's beanstalk grows high to the sky.
Posted by On The Flip-Side at 7:26 AM 2 comments: 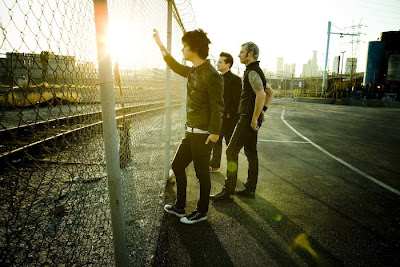 Success for a band can be a damn pain in the ass. The reality is that for every fan the band brings in, they bring in probably twice as many doubters. And when the band has a huge breakout album that wins widespread acclaim and massive sales, the question immediately turns to "what's next?". The Who had to face that question after the success of Tommy. They responded with their magnum opus, Who's Next. The Clash had to answer that question after the success of London Calling. They responded with the spotty and wide-ranging Sandanista. The Beatles had to do it after every album. And it's the position that Berkeley, California's Green Day find themselves in after the breakout success of American Idiot. One could excuse them if they came out with a straight-ahead, play the expectations down album. Or even if they fell flat on their face. But they didn't do either. Instead, this week, they came out with an album, 21st Century Breakdown, that feels very much like a natural extension of American Idiot. But it is perhaps even more ambitious than Idiot.
From Latin inflected grooves to more nuanced George Harrison styled songs to straight ahead hardcore to T-Rex inspired glam rock, the album is a grand musical exposition that changes style and tempo as fast as Liz Taylor changes husbands. Lyrically Billy Joe Armstrong focuses on two characters, Christian and Gloria who struggle with intimacy and personalization issues in a high-tech 21st Century world. The musicianship is top notch, as is the large, lush production from Butch Vig.
Pete Townshend and The Who clearly have had a large influence on Billy Joe. One could argue that Ray Davies of The Kinks has had an influence as well. Both those artists were masters at creating characters in their songs. Characters we could empathize with, hate, envy and fear. Characters who had delusions of grandeur at the same time that they had feelings of unworthiness. And both artists were willing to use whimsy in their lyrics and in their music. A trait from their Song-Hall influences of Post War Britain. But it is Townshend's penchant for creating thematic albums (Quadrophenia, Who's Next, Tommy, Sell Out) that is clearly on display in Billy Joe Armstrong's album. But that is not to say that this is a rip-off. Far from it. It is simply an artist picking up on a creative conceit created by others and used as a tool to tell his own tale. The album's namesake, a massive, constantly evolving song employs nods to Townshend's early pick-up switching guitar work (hear Anyway, Anyhow, Anywhere) and Mick Ronson's grand guitar work for David Bowie.
But that's not our song. Our Song of the Week is one of those more whimsical (at least musically) songs. It's Peacemaker and it sits right smack dab in the middle of the album sandwiched between that Mark Bolan type of song and a plodding, melodic, Weezer-like song.
I hate to pull out just one song, but take a listen to Peacemaker. If you like it, there is no guarantee you will like the rest of the album as every song is very different. Same for if you hate it. This is a complete album that, like Forever Changes by Love and American Idiot, needs to be heard in order and in context of the other songs.
Posted by On The Flip-Side at 9:39 AM 1 comment: 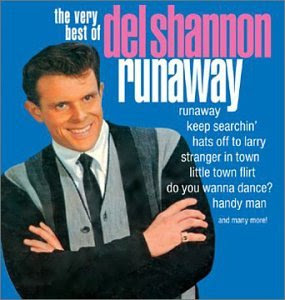 When Del Shannon’s first and only number one hit, Runaway, appeared in 1961, there were good reasons to think he would have many more. Here was a distinctive singer with an obvious knack for writing songs that people wanted to hear. Runaway managed to combine haunted desperation with catchiness, a formula that is magical if all too rare. But while he did have a few more songs in the charts through the mid-60s, none hit with the power of Runaway. Still, he should be remembered for more than just that song. Six months before the Beatles first appearance on the Ed Sullivan Show, Del’s cover of From Me To You, which he learned while appearing with the Fab Four in England in 1963, became the first Lennon-McCartney song in the U.S. charts, providing the only American test of the duo as songwriters completely removed from the hurricane of Beatlemania. Del’s version sticks pretty closely to the original, except when he shows off his vocal chops on the coda.

Other than Runaway, my two favorite Del Shannon songs are Keep Searchin (We’ll Follow the Sun) from 1964 and Stranger in Town, from 1965. They are a matched set of sturdily strummed minor-key dramas, with paranoia as the overriding sentiment. Keep Searchin' exploits the Runaway formula (similar chord progression beginning with an A-minor to G major change, a simple, melodic organ solo, and perfectly controlled but thrilling leaps into falsetto). Stranger in Town continues the sketchily outlined story of the lovers on the run while substituting a sax break for the organ. These two minute chapters detailed the futility of escape, and were perfectly tailored to the era when The Fugitive was one of the most popular shows on the small screen.

After years out of the spotlight, working as a producer and on the oldies circuit, Del attempted a comeback in the 80s with the backing of Tom Petty. He was even asked to join the Travelling Wilburys after Roy Orbison’s death, and his falsetto would have filled that void as well as anyone’s could have. But by then his demons had finally caught up with him, and Del Shannon took his own life in February 1990.

Song of the Week: "Going Away Baby", Grains of Sand 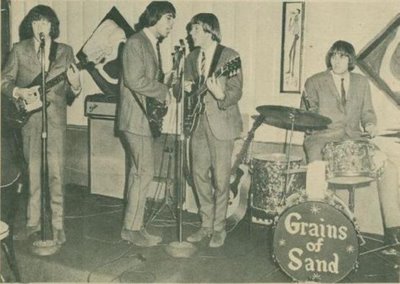 Dusty bins of record stores and countless thousands of entries on eBay are littered with brilliant music that has long been forgotten. Today's Song of the Week is one such song. It's by the LA based band, Grains of Sand and the song is the frenetic Going Away Baby.

I first heard this song from Greg Shaw's brilliant late 70's compilation of 60's garage rock, Pebbles. Pebbles Vol. 1 to be exact. It was certainly one of the standouts on an album filled with forgotten gems of testosterone fueled rock-n-roll by kids who were just one good date away from being satisfied. But lucky for us, most of those kids never got satisfaction and thus made music of frustration for you and I to enjoy some 43 years later.

Grains of Sand were a 4-piece combo that signed with the boutique Genesis Records and immediately went to cutting one of the all-time great 60's pop numbers, That's When Happiness Began. It's one of those songs that beautifully matches pop melodies with a certain smugness to appeal to a wide variety of audiences. The Flip-Side is She Needs Me, a reverb drenched pounder of the highest quality. The groups next single is our SoTW: Going Away Baby. Going Away Baby features the frenetic guitar work of the songs composer, Doug Mark. The barre-chord riff is used as a refrain in the song, continuously bringing it back to it's most appealing quality. What sounds like a Farfisa organ to this writer, takes a front and center approach with it's three chord riff and even takes the center stage on the lead as Mark pushes the song along like a Pitt-Bull on caffeine. And like all sexually frustrated teenage singer's of 1966, the singer is sick. Sick of it baby. He can't take you no more. Yeah.

Video Diary: The Who, "A Quick One"

The best music performance ever filmed. Period.
Posted by On The Flip-Side at 9:46 PM 4 comments:

Email ThisBlogThis!Share to TwitterShare to FacebookShare to Pinterest
Labels: A Quick One while he's away, john entwhistle, keith moon, keith richards, Pete Townshend, rock and roll circus, Roger Daltrey, tabs, The rolling stones, The Who 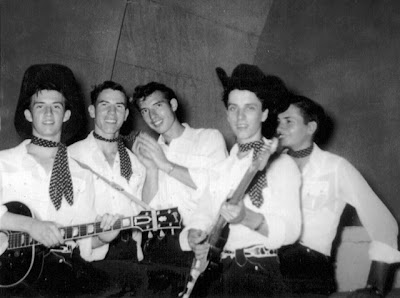 The Flip-Side central command has many pleasures in life. Some of them to which we even admit publicly. One of those is turning people on to hep-cat (ooh, did we just try to get away with that term?) music that -- in all likelihood -- the aforementioned "people" have never heard before. And so it is, with great pleasure, that we present today's song of the week. The song is Purr, Kitty, Purr, by Denton, Texas band, Sid King and the Five Strings.
Sid King was actually a lad from Denton, Texas born with the un-rock-n-roll name Sid Erwin. Sid and his gang made a (new) name for themselves playing radio stations, school dances, roller rink "all night" hops and other assorted local gigs in the early to mid 1950s. Like the teenage Buddy Holly way over in Lubbock, The Five Strings were playing a steady dose of Bob Wills influenced Western Swing. Then they began flirting with a new sound. That sound, of course, is rockabilly. But unlike Holly or Elvis or the Johnny Burnette Trio, The Five Strings never quite stepped wholly into the nascent rockabilly craze. In fact, they remained, at heart, a western swing band. And a dang good one indeed. But, in the flip-side's humble opinion, their best work was their rockabilly forays. But even those weren't wild ravers like the other cats we mentioned. No, they were more in the vein of Carl Perkins: country boys at heart flirting, but never quite becoming, rock-n-roll. Their best songs, like Purr, or Shake the Shack, are a study in restrained power. Songs which hint at a break out, but never quite make that break. Songs that play with lyrical coyness but never quite turn into the bathroom-wall expose it may have become under a different band.
Purr, Kitty, Purr is a wonderful song with a snappy "tom-cat" beat and a lyrical guitar up front and center. But, again, the guitar, like the whole song, is restrained. Even Sid's kitty-cat growls seem innocent and somewhat humorous by today's standards.
I'm sure you'll agree, this kitty-cat is the type of song you'll enjoy making purr over and over again. Enjoy. And enjoy with a person you love. Or by yourself, if that's your thing, you know. I won't tell.
Posted by On The Flip-Side at 2:18 PM 4 comments: