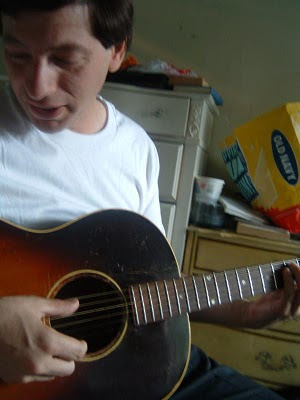 A few days ago on my way home I noticed a new (to me) person with an interesting acoustic guitar setting up at Montgomery BART. It was enough to make me linger a bit. He started right in with some well-rounded, well-articulated ragtime song. And with rag being one of my true joys, I knew I had to stick around.

Craig Ventresco for the last five or so years has been playing at an SF restaurant, I gather with at least one other musician. This night that gig ended and he decided to try his hand with the commuters. Here we have what he calls the Margie Medley, comprised of two popular songs from the early '20s, Margie and Singin' The Blues. Both tunes were written in part by J. Russel Robinson and Con Conrad. In 1919, Robinson, a ragtime pianist and composer, would join the Original Dixieland Jazz Band, a seminal jazz group that recorded these tunes for the first time - also in medley form - in 1920 for the Victor label. Margie would prove to be a hit, and in time become a standard that was covered by many including the cornetist Bix Biederbecke in 1927, and later, John Coltrane. Craig is playing a custom made Fraulini guitar.
Posted by Flipsider at 8:45 AM 5 comments:

Video Diary: The Louvin Bros. "I Can't Keep You In Love With Me"

Posted by On The Flip-Side at 3:16 PM No comments: 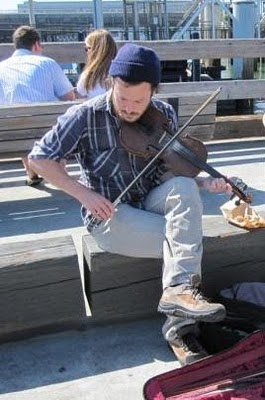 How you all doin' ? Here's some fine fiddle work by one Nick Stillman. I came across Nick a couple times last month at Montgomery Bart. I had to stop and listen each time. Turns out he plays fiddle with AxeL EepH, a trio playing in the SF Bluegrass & Old-Time Festival, coming just around the corner in February. But for now, let's give a listen to Nick playing Cumberland Gap.

Some of you might recall a previous post featuring Emily Bonn on the banjo. Well, she'll be playing with her Vivants at the same festival venue and night as AxeL EepH, on February 14: http://www.sfbluegrass.org/11fest/show.17.html

Listen - R.L. Burnside performs Skinny Woman
Walk into almost any blues jam in America, Europe or Australia and you almost assuredly will be hit with a tidal wave of guitar players with a Fender Stratocaster, a fedora, a Marshall amp, a ton of overdrive and a grimacing face that punctuates every overdrawn, noodling note they play. I like to call these guys the Strat-in-a-Hat players. They treat the other musicians, even the singers, with a sense that they only perform a utilitarian necessity to deliver their long Stevie Ray Vaughan influenced guitar solos that overwhelm everything and everyone.
But that is not what the blues always was. Nor what it should be. The art of the subtle has been lost in the electronic age. Today's Song of the Week comes from Coldwater, Mississippi in the late 60s. It's the first recording of a farmhand as he sits in his living room playing, alone, by himself, unaccompanied, without anyone else, on a cheap Kay acoustic guitar tuned to an open G. The song is Skinny Woman and it is just one of the 14 recordings compiled on the now out of print, First Recordings album.
R.L. Burnside would grab some notoriety late in life when bands like The North Mississippi Allstars and the Black Keys started covering his work and his more modern recordings, such as It's Bad You Know, got action on shows like The Sopranos. (read our May 10, 2009 article on this song here).
But this is R.L. Burnside at his rawest, and best. The influence of his neighbor, Mississippi Fred McDowell is quite evident. Enjoy. And seek out the First Recordings album on Fat Possum Records if you can.
Posted by On The Flip-Side at 12:14 PM 1 comment: