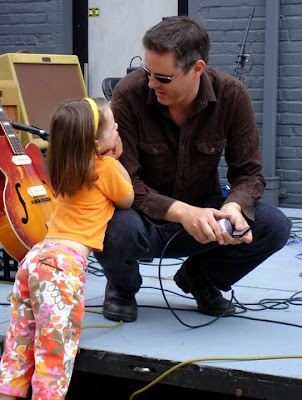 Here is a little ditty I recorded this weekend while hanging with my kids in Goblin Valley, Utah. My daughter originally came up with the basic melody while singing about butterflies and bacon. Two things she really loves! I added a few flourishes to fill it out and changed the name from Pretty, Pretty Butterflies and Bacon to Boulder Bound, which we were at the time.

It's a one-track recording with no edits and employs a Gibson J-200 in open G tuning and a straight tuned Lee Oskar Harmonica in the key of G and that's all. It's a finger stretcher.

Song of the Week: "Preaching Blues (Up Jumped the Devil)", Robert Johnson 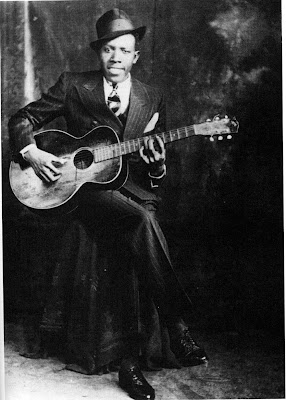 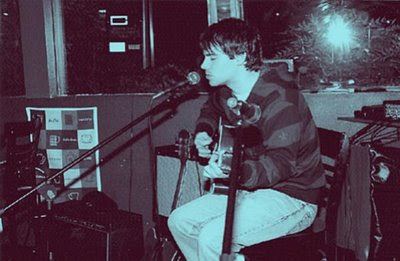 Hi there, my name is Matt Howard.  I currently reside in the small town of Harrison, Arkansas. This is a song I wrote called Blame the Beat Poet.  It's a song about two people drifting apart, written in a sort of punk/country style.  The organ and drums were provided by a Yamaha keyboard with an acoustic guitar to fill out the sound.
If you like it I have more songs on my myspace. (myspace.com/rivervalleysermon).
Posted by On The Flip-Side at 12:11 PM 1 comment: 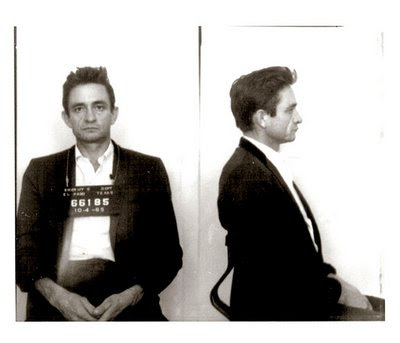 Everyone loves Johnny Cash. Punks adore him. Country and Honky Tonkers revere him as a Mt. Rushmore figure of the genre. People who hate country, love Johnny Cash. Folkies love him. Rock-n-rollers love him. Hippy-jam band cats love him. Honestly, how could you not like the man in black? He was exceedingly original, stiff armed the stiff Nashville machine, embraced musicians like Bob Dylan when others around him were hostile to rock and folk, and produced consistently great quality work. JC even embraced people who were relegated to the trash bin by society as witnessed by his prison concerts.
And no wonder everyone loves him -- his music, his voice, his story-telling skills are just top-notch. As evidence, I offer the man's 1961 sleeper, Tennessee Flat-Top Box. The somewhat autobiographical tale of an unassuming boy who was quietly turning heads by doing things his own way is classic Cash. So is the Tennessee Two's chug-a-chug-a-chug chug rhythm. But what's different about this song is that striking and constant acoustic guitar lead. I'm unsure if the wonderful wooden indian-like lead guitarist Luther Perkins is playing this lead or if a studio musician was called in. In some aspects it is very Luther (the walking leads with heavy emphasis on the polka beat), but in other ways it is not Luther at all (the multi-string slides and the use of acoustic). I wouldn't be surprised if it turned out to be Carl Perkins on lead. I just don't know. If you do know, please let me know.
I hope you enjoy this song. Cheers.
Posted by On The Flip-Side at 8:23 AM 2 comments:

(Not, Alas) a Monkee’s Nephew 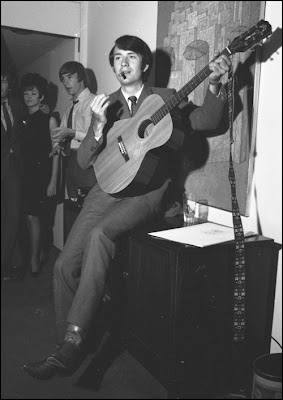 Sometime last year I think it was, I had a dream that Michael Nesmith was my uncle. I don’t remember much about the specifics, or even if I managed to ask him the burning question, “How could you work with Davy Jones for three years without beating the crap out of him?” But I do remember that I was pretty sad to wake up and find that Uncle Nes wouldn’t be at Thanksgiving after all.

I’ve always liked the Monkees, and I firmly believe Micky Dolenz has one of the great rock and roll voices. But Nesmith was the one who made them feel substantial and not just a made for t.v. cartoon.  He was already an experienced songwriter before he was cast as a Monkee.  His song Mary, Mary appeared (somewhat uncomfortably) on the Paul Butterfield Blues Band’s second album East-West even before the “Monkees” series debuted in September 1966, and in 1967 the Stone Poneys hit big with Different Drum another pre-Monkee Nesmith composition.  By picking an actual quirky tunesmith who was not a central casting teen idol type, the Monkees producers sowed the seeds for the group’s eventual rebellion against the use of outside songwriting and studio musicians.

While existing in the heart of the Monkees teen-pop bubble, Nesmith was increasingly drawn to country styles.  In May 1968, as the Monkees show was winding down, he recorded a session in Nashville.  Most of these songs were not used on Monkees records, and some would be redone on his own albums in the early 70s.  I like these early versions, which exhibit some of the same generational tension between song and backing that Bob Dylan’s Nashville-era recordings do.  In contrast to his wry and laconic Monkee persona, a lot of Nesmith’s songs are wordy and conversational.  Check out Some of Shelly’s Blues and The Crippled Lion.  While the backings are pure 60s Nashville country (with the addition of harmonica on Shelly’s Blues) the songs themselves are, in typical Nesmith fashion, crammed full of words and chord changes.  In Shelly’s Blues Nesmith dishes out his brand of clear-eyed but syntactically jumbled advice, while The Crippled Lion is a humble and self-aware inwardly directed pep-talk.  The guy would really make a fine uncle. 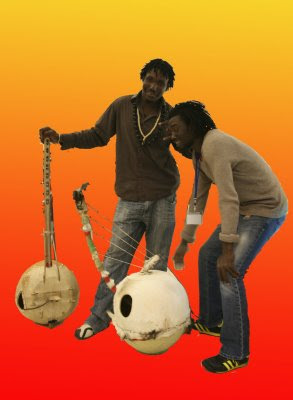 It's not the first time I've ventured out at lunch in search of some fresh music or scenery. It's not even the first time I've conducted that search at Powell Street BART Station. I heard it was a great place for street musicians and, anyway, it is one of my favorite areas of town. The main entrance to the station passes by an area dominated by street dancers with thumping tunes, street preachers, bums and sundry ne'er-do-wells, a row of chess tables, many with games in progress, a cable car turn-around rife with queued, eager tourists and a lone hot dog cart, only to proceed down past a large sub-surface public area. It always harkens back to visits to SF in my youth. Situated at the edge of both the tenderloin (to the west) and the financial district (to the east) this is one of my favorite parts of the city.
And last week that search was richly rewarded. Playing down in the west end of the station were two guys from Africa, one from Mali and one from Guinea. Yacouba Diarra, the young Malian and principal vocalist, was playing a ngoni (pronounced "goni"), a large gourd instrument with some eight strings and more like a kora than other descriptions and pictures of ngonis I've seen on the internet. (Another Malian musician, one of the foremost kora players, Toumani Diabate, can be seen playing a 21 string kora here.) The young man accompanying Yacou, named Temomo Mani, is on a bolon, a more percussive gourd instrument that nonetheless has four strings to pluck as well as some bells that jangle freely at the end of the neck. The ebullience and spontaneity with which they play this song, Mariama, made my lunchtime excursion one I will not forget. I hope you enjoy!
To any of you Bambara speaking listeners, translations are welcome!
Posted by Flipsider at 9:05 AM 5 comments:

Sonny Rollins with Jim Hall who looks like the guy who played Mindy's dad in Mork and Mindy.
Posted by On The Flip-Side at 10:31 AM 1 comment: