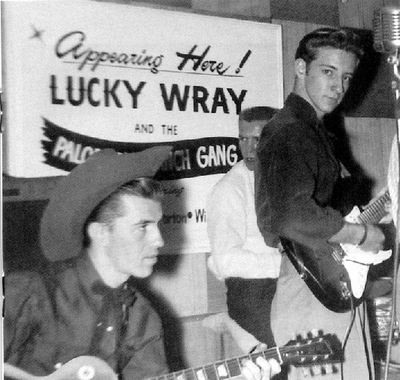 {Right click here to listen to Link Wray perform our SoTW, Deuces Wild, while you read this lovely article.}
Have you ever seen the diminutive little primate from Madagascar they call the Aye-Aye? It's one strangle looking creature. It doesn't look like a primate, but it's not quite a rodent and it's not quite a feline either. It's so strange as to make you stop and take a look. Invariably you make an audible query to no one in particular: "What is that? It looks like some sorta missing link or sumpin'." (in this theoretical conversation, you speak with a poor colloquial American accent, sorry.)
What the hell does an Aye-Aye have to do with our SotW you ask? Good question. An Aye-Aye, I propose, is like our artist this week. That artist is primitive guitarist Link Wray who, in his day, sounded nothing like anyone else. How refreshing is that? Link Wray and his Raymen -- brothers Doug and Vernon and bassist Shorty Horton) first appeared in record bins in 1958 with their instrumental hit, Rumble. The song was tagged as subversive and banned. (Take a second to let that sink in. An instrumental was banned! I know of no other instrumental that has ever been banned.) Suddenly Link Wray and his Raymen were in demand in the clubs of their adopted home of Washington, DC.
Let's back up a bit. Link Wray (born Fred Lincoln "link" Wray Jr.) was perhaps the most unlikely person to become a pop star. Link was the son of two preachers, one caucasian, the other a Shawnee, who grew up in rural Dunn, North Carolina. After a stint in the Army, Link landed in Norfolk, Virginia where he hooked up with his brother Vernon who was trying to make it as a singer. The band relocated to Washington, DC around 1957 where they got a gig as the house band on Milt Grant's House Party, a local teen dance show. By now they were playing as Lucky Wray and the Palomino Ranch Hands. It was here that they improvised the rough strewn song that would become known as Rumble to cover the intro and outro of a commercial break. The record took off locally and the band was now known as Link Wray and the Raymen (also, the Wraymen).
For the next few years Link Wray and the Raymen would record numerous singles, and the occasional album filled with gritty and beautifully sloppy, under-produced instrumentals (with the occasional vocal number thrown in) in their own recording studio which was actually a converted chicken coop. Link preferred the cheaper guitars and had a special affinity for the easy to overdrive Danelectro Longhorn played through a small Premiere 71 amp. As he was also largely deaf, he liked to play loud. Today's SoTW, is illustrative of such a recording. It's Deuces Wild, the 16th single from Link Wray and the Raymen, and it's a wild romp of a song recorded in the sweltering summer heat of Washington, DC in 1964. That's right, this torture device of a song was recorded in 1964. The Beatles had just played their first ever gig in America just down the street from where Link Wray recorded in his chicken coop. The Kinks and The Who were for the first time ever entering the British studio with American producer, Shel Talmy. Things were about to change in America. But in the chicken coop, the Raymen were running through yet another of Link's demented instrumental compositions. These didn't rely on a deft right hand like Dick Dale's numbers, they didn't require exquisite production as did those of The Shadows, and they didn't rely on undeniable melody lines as did the songs of the Ventures. Link Wray and the Raymen did it with brute force. They performed with the primal force of an Aye-Aye (okay, Aye-Aye's aren't known for primal force, but I need to circle back and wrap this puppy up...so work with me). Link Wray's work became hugely influential to the next generation of songwriters such as Ray Davies of The Kinks and Pete Townshend of The Who. Pete Townshend noted in 1970, "He is the king. It if hadn't been for Link Wray and Rumble, I would have never picked up a guitar."
Now sit back and enjoy the human Aye-Aye, Link Wray, perform his 1964 composition, Deuces Wild. This is some wild and wooly stuff.
Posted by On The Flip-Side at 8:11 AM 4 comments:

Happy Friday to all. Two, that's right, two Ventures videos in one. Plus a creepy ad.
Hey kids, want to be cool this weekend? I thought so. If for some freak of nature reason you actually get invited to a party, get-together or, even better, one of them soirée parties that I've read so much about in them vintage swinger magazines, just throw out the following sentence: "I've always believed that Nokie Edwards is criminally underrated as a guitarist. How about you?" I promise you, Ventures loving members of the opposite sex are going to be knocking down your door with pipeline love.
Posted by On The Flip-Side at 10:13 AM No comments:

Song of the Week: "Come On (Let the Good Times Roll)", Earl King 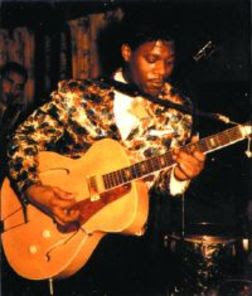 This song has had me flippin' like a flag on a pole ever since I caught Ron Silva and the Monarchs performing it in San Francisco last month. It's Earl King's original composition (but second recording of the song), Come On (parts 1 and 2) as recorded for Imperial Records in 1960. Many of you may know it from Jimi Hendrix's cover of the song as recorded for Electric Ladyland, or from Stevie Ray Vaughan's cover of Hendrix's cover. Or some hipsters may know the cool and mellow Alvin Robinson version. It doesn't much matter, they're all damn good.
I don't know all that much about Earl King other than he had a residency at the infamous Dew Drop Inn in his hometown of New Orleans and played with Guitar Slim and even played as Guitar Slim after Slim was temporarily knocked out of action by a nasty little auto accident. (Earl King also played with Irma Thomas who got some love from On The Flip-Side a few months back.) Earl King became a mainstay on the New Orleans stage for years until his passing in 2003.
Come On not only has an undeniable groove that will get your tail feather shaking and some wicked little guitar riffs (this writer is particularly smitten with the guitar riffs at 3:40), but this song also has some great lyrics. Lyrics like, "I love you baby like a miner loves gold", "you've got me flippin' like a flag on a pole", and "so many people live in make-believe/they keep a lot of dirt up their sleeve." I'm not even sure I know exactly what is meant by that last one, but I like it.
Click here to listen to Earl King perform Come On (parts 1 and 2).
PS, turn your lamp down low, you know I love you so.
Posted by On The Flip-Side at 8:44 AM 2 comments: 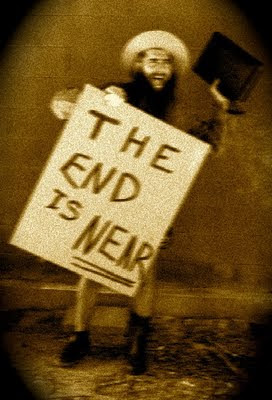 Hello - My name is Hollerin' Hank McCloskey and I would like to offer up a song to your listeners. We are The Itinerants, a two brother Pentacostal band out of Omanik Maod, Georgia. We are preachers in our rural church and we perform for our congregation while handling snakes.

The song we offer up is called God's Crooked Smile. It is about a godless killer with a split personality who is confronted with his horrendous crime and now looks to Jesus for redemption. Both myself and my brother, Jeremiah McCloskey, sing in this song -- each representing a different personality of our killer.

I hope your listeners will give us feedback and maybe join us on a Sunday at our Church. Thanks for your willingness to share our cautionary tale with your listeners. With respect and God's love, Hollerin' Hank.

[ed. note: I have changed some of the words and spellings from the original email, with permission from Mr. H. McCloskey.]

Song of the Week: "The Last Kind Words", David Johansen and Larry Saltzman 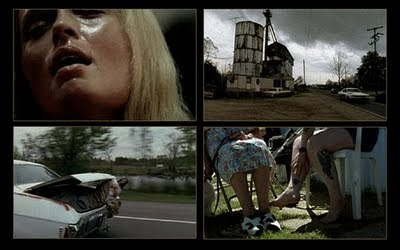 For your listening pleasure, we present this week, David Johansen and Larry Saltzman performing their rendition of the obscure Geeshie Wiley blues song, The Last Kind Words. This was recorded for the filming of the documentary, Searching for the Wrong Eyed Jesus. Put it on your Netflix list. Trust me.
This song reminds me -- both musically and lyrically -- of the more famous St. James Infirmary.
Click here to listen to the full version of the song.
An abbreviated version of the song, as it appeared in the documentary, can be viewed right here.
Posted by On The Flip-Side at 10:12 AM 8 comments: