Pacific Northwest Spotlight: The Talismen - I Know A Girl/I'll Take A Walk 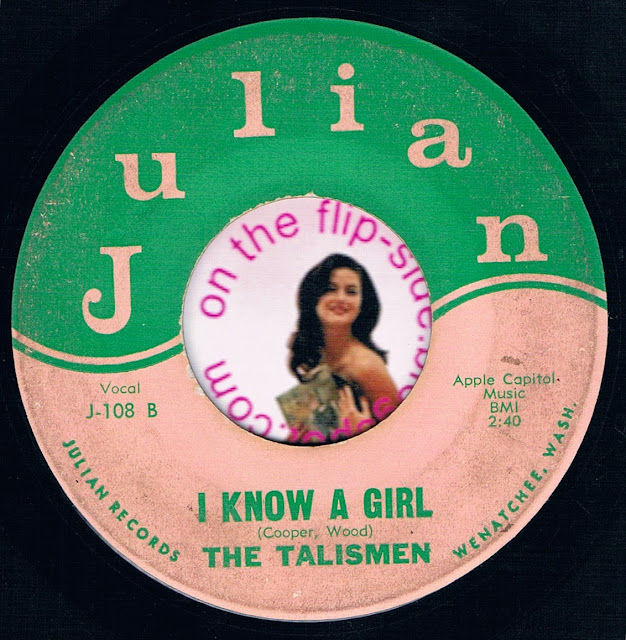 Day 2 of our Pacific Northwest entrant in our region by region Battle of the Garage Bands takes us to Wenatchee, Washington, a small town smack dab in the middle of the state. For a very brief moment the town became a hotbed of garage rock. That's because a local DJ by the name of Don Julian Bernier founded his own label and started going around the local high school, middle school and dances to sign acts. And boy did he get some good ones.

One of the two best acts he picked up was a local high school band calling themselves The Talismen. The Talismen were John Wood on guitar and, I believe, lead vocals, Jack Cooper on guitar and vocals, Loren Bolinger doing double duty on guitar and keyboards, Leon Jeffreys on bass and Joe Britt on the drums. The Talismen released only three songs (they got only one side of one record) in their brief two year career. Today we focus on their second, and final single. You know, the one where they got both sides of the record.

I'll Take A Walk/I Know A Girl was released on Julian Records in 1966. As we so often do, we are going to flip the record over and start with the flip-side. Sadly our copy of this rare disc has a bit of surface noise on it. Bare with us, please.

I Know A Girl is a raver in the first order. Raving vocals, repeated bass breaks that are marvelous and a guitar solo that makes you stand up and take notice of the teens from little old Wenatchee! It's very reminiscent of the guitar work done on the Mitch Ryder and the Detroit Wheels' records. Of course the solo ends with a bass break. We love the ending as John screams into the microphone and Loren Bollinger pushes his farfisa organ to the max. The original composition was penned by Wood and Cooper.

Sure, I Know A Girl is the obvious garage rocker here, but I want you to really stick with us on the sentimental A-Side, I'll Take A Walk. Teen love abounds on this slow number composed by Jack Cooper, bassist Leon Jeffreys and drummer Joe Britt. Great lead vocals, great harmony singing, a tasteful organ bed and, again, an outstanding guitar lead. This time very gentle and jazzy.

Both numbers were recorded in Spokane, Washington. I've nicked photos from a couple of sites and want to give credit where credit is due. Links to both included. The first picture comes from Pacific Northwest Bands and shows (from left to right) John, Loren and Jack rocking it up while wearing grandma's curtains. 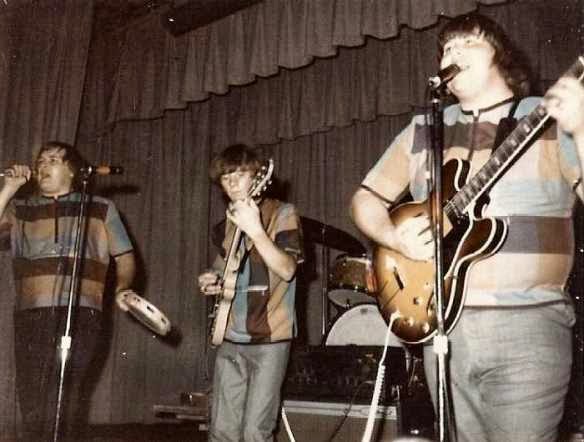 The second photo comes from a great site dedicated exclusively to Julian Records! How cool is that. I got some good info on the label from that site. It looks like they got this picture from a guy named Craig Green. 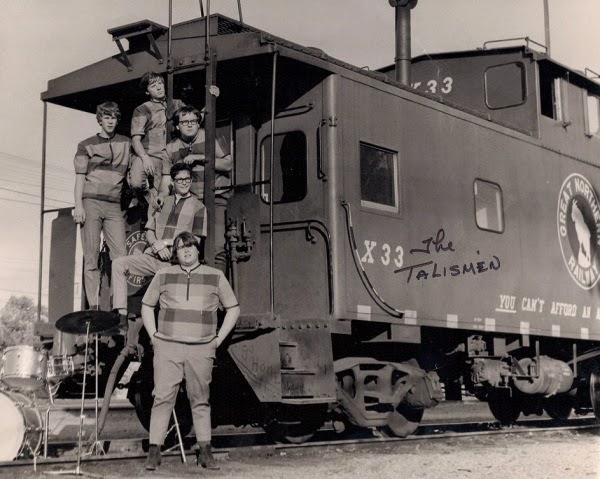