And the winner of the Nor Cal Battle of the Garage Bands is... 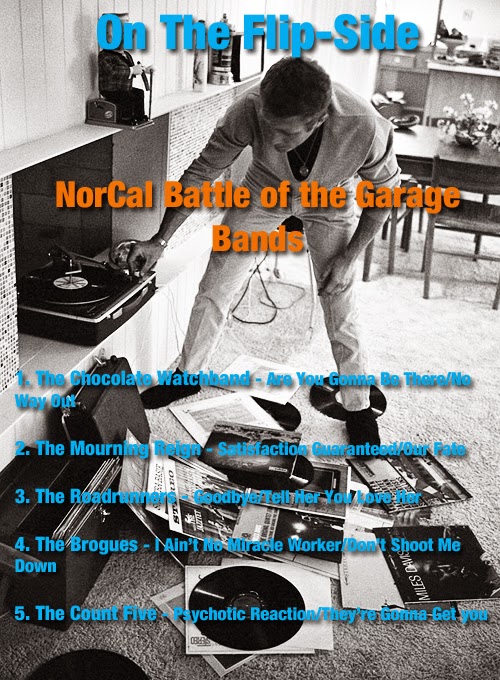 It is not much surprise that San Jose's Chocolate Watchband's amazing release on the Tower label took the crown in this challenge. We have been in awe of it ever since rumors of its existence whispered in darkened corners in long-forgotten smoke-filled dens reached our incredulous ears. It was unanimous. What is unprecedented is that the next top 3 of the roster were also unanimous in both choice and order of greatness!

Amazing, too, is that San Jose also claimed the second and fifth place with The Mourning Reign and The Count Five. San Jose, an unlikely garage hotspot for sure, had it going on in spades. The Central Valley brought in third and fourth with The Roadrunners out of Fresno and The Brogues out of Merced. Good work guys. You make these Flipsters proud of their valley roots.

Up next is the final region from the fifty states, the Pacific Northwest: Oregon, Washington and Alaska. Hold on to your seats. Until then, here is a sample from all the winners thus far. And a nifty map down below.

Rocky Mountains: Phil and the Frantics: Say That You Will/'Till You Get What You Want
Mid-West: The Litter with Action Woman/Legal Matter

Texas: The 13th Floor Elevators with You're Gonna Miss Me/Tried To Hide

New England: The Squires with Going All The Way and Go Ahead

The South: The Bad Roads with Too Bad/Blue Girl

The Mid-Atlantic: The Enfields with She Already Has Somebody/I'm For Things You Do

New York: The Blues Magoos with We Ain't Got Nothing Yet/Gotta Get Away
Until next time, we'll see you On The Flip-Side!

Posted by Flipsider at 1:25 PM