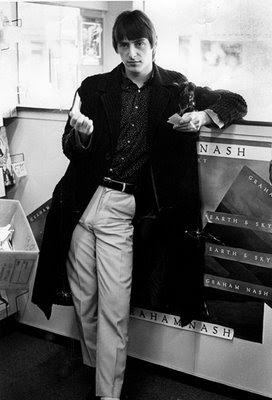 A couple of weeks ago I was leaning against a pool table in a loud music venue drinking some Dale's Pale Ale and listening to the Austin-based group, The Band of Heathens, cover their second Bob Dylan song of the night. My friend, Roger, and I began talking about the prolific writing of Dylan, the elusive nature of writing hit songs and how so few people can do it with regularity. I'm not talking about just writing a great song (as we highlighted last week). Truth-be-told, great songs are as abundant as paparazzi at another Britney Spears meltdown. I'm talking about writing a hit. And not just once, but hit after hit. Not many have been able to do it: the aforementioned Bob Dylan, John Lennon, Paul McCartney, George Gershwin, Hank Williams and Willie Dixon immediately jump to mind.
Should someone like Paul Weller be on this list? Some may ask, who? Paul Weller, unlike the others already mentioned, remains largely unknown in the United States but was hugely prolific in his native England. For five all-too-brief years from '77-'82, Paul Weller's band, The Jam, dominated the airwaves in England with 18 consecutive top-40 hits, including 4 number one hits. Only the Beatles, The Stones and the German Luftwaffe had ever dominated the air over Britain more than did the Jam. But in the U.S., Paul Weller and The Jam were as common as a juggling platypus. Even as The Jam's competitors -- namely Elvis Costello, the Sex Pistols and the Clash - made inroads with the provincial United States record-buying public of the day, The Jam were nowhere to be found on FM radio.
Why? It wasn't for lack of quality songwriting or performance ability, that's for sure. The Jam exceeded in both categories. The answer lies more in a mix of cultures, I believe. The Jam were a VERY British band. Unlike someone like Mick Jagger who often affected an American accent when he sang, Weller sang with a thick British accent about peculiarly British experiences. Evidence Down In the Tube Station At Midnight. How the hell was a kid from suburban Phoenix supposed to relate to a song about being mugged on a subway by skinheads who "smelt like pubs and wormwood scrubs and too many right wing meetings"? And that is if the kid can understand what the heck Weller was saying! And unlike the Sex Pistols or the Clash, whose singers also sang proudly with working class accents, the Jam didn't offer a visual curiosity that demanded attention (even if it was only scorn). Neatly trimmed in their black and white mod suits, paisley scarves and bowling shoes, the band's visual approach came across to Americans as little more than Euro-square.
But back home, The Jam were chart-toppers. Perhaps the pinnacle of that run of 18 consecutive top 40 hits for The Jam occurred with their first release of 1980, a stunning double A-side single of Going Underground b/w Dreams of Children. The single went to number 1 and cemented the trio as the darlings of the press and the undisputed rulers of the charts. Weller's rousing anti-Thatcher/Reagan era Underground was a political screed that questioned the public's thirst for war ("the public gets what the public wants/but I don't get what this society wants") while delivering a rousing musical score of rising power chords and pounding bass that barely give Weller time to breathe between verses. The song hits her crescendo at 2:19 as the over-driven Richenbacker pulls the song out of a staccato rhythm-section interlude. Weller parallels the guitar's melody as he venomously barks out "braying sheep on my TV screen/make this boy shout! Make this boy Scream!"
It's hard not to get your heart pumping on this one. I hope you enjoy.
Posted by On The Flip-Side at 9:11 AM