New York Spotlight: The Brigands - Would I Still Be Her Big Man? 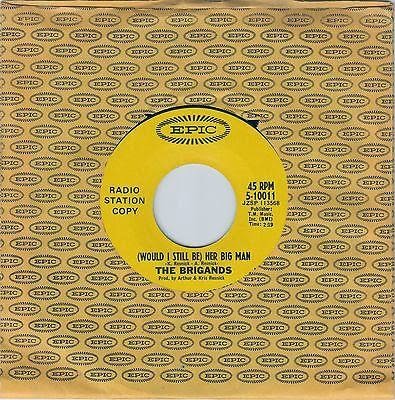 New York Battle of The Bands takes us to the Brill Building. I think.

I've always loved this song. And, I've always had a suspicion that this band is not really a band. Quite frankly, the song is too well structured to be your typical 60's garage band kicking out one lonely single after the lads pooled all their money together to go down to the big city to record that song that makes everybody get up and dance. And a major label like Epic? And, the Resnick brothers? Didn't they write Yummy, Yummy, that god-awful bubble gum pop song? All the circumstantial evidence points to "studio" band. Add to that the fact that nobody has ever come up with a band flier or a story of playing with the Brigands at the Battle of the Bands at some high school in Yonkers and it is pretty clear that the Brigands were but only a Tin Pan Alley creation.

But that shouldn't stop us from giving Would I Still Be Her Big Man? a big wet kiss. Mwuaa! Released in 1966 (of course!) on Epic Records, Would I Still Be Her Big Man? details the double life and troubled mind of our hero who finds himself sweating from 9-5 in a factory during the day and dressing in top-notch suits at night just to give the girl he loves the things she wants. But if she finds out that he is just a hard working blue collar chump, then what? Like us, our protagonist is only left to wonder:


Ahh, baby likes to eat in fancy restaurants. Well she's always had the things she wants. I'm afraid she'll say goodbye when she finds out I'm just a poor guy. I wonder, I wonder, would I still be her big man?

Dude. Man up! If this she-devil doesn't love you for your cool guitar-riff that repeats throughout the song, then you need to dump her. Not only is that guitar riff nicely fuzzed, you have great tambourine work and a bitchin' little key change to keep us snapping our fingers and shuffling our feet. You are a 7" record, nicely rounded, on a great label. You need to realize that you are loved. If this gold-digger doesn't love you for that and that alone, then someone else will. And that person will still treasure you 45 years later. They may even covet you on eBay. And maybe -- just maybe -- someday they will write about you on their way cool music blog.

Email ThisBlogThis!Share to TwitterShare to FacebookShare to Pinterest
Labels: epic records, new york, resnick, The Brigands, tin pan alley, would i still be her big man