Song of the Week: "Valerie", The Zutons 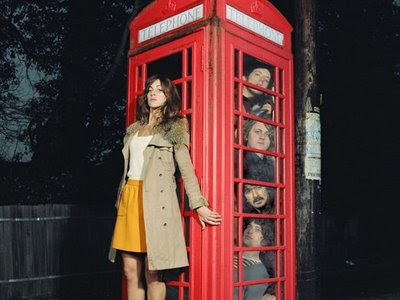 It's pretty rare that I hear a song in passing and immediately become hooked. That's what happened the other day as I was flipping channels on TV. Somewhere between countless repeats of CSI: Poughkeepsie and Law & Order: The Tax Assessment Files, I ran across an HD music channel that was showing a bunch of one-off live performances. Click, click, click. What was that? I heard one little refrain and I clicked back. Live on stage was some band I didn't recognize performing a song I had never heard before. But, man oh man, that song had a nice groove to it. Before I could say "Supercalifragilisticexpialidocious" the song was over. Thanks to the wonders of the Internet and the obvious refrain of the song, I was able to piece it together quicker than those super sleuths on CSI: Youngstown. That little song I saw on the boob-tube two weeks ago is our Song of the Week. It's called Valerie and it is performed by some lads (and a lass) from Liverpool, England who call themselves The Zutons.
I don't have too much knowledge of this band (like...damn-near none). So I'm not going to waste a whole lot of space telling you that some other band -- whose name escapes me at the moment -- is also from the seaport town of Liverpool. I'm not going to make crass comments about the ease of looking at Sax player/back-up vocalist Abi Harding. All I'm going to say is that frontman David McCabe, wrote a pretty darn catchy tune which appeared on the band's sophomore effort, 2006's Tired of Hanging Around. With nice Ray Davies like vocals and good musicianship, the song's melody will burrow into your head like a musical tick. It's catchy enough that it not only stopped me dead in my click, click, click. It also caught the attention of that Über-skank (but talented), Amy Winehouse, who covered the song and had a nice little hit with it. (warning: by clicking the following link you will be subjected to bee-hive hair-dos that may hide the missing dwarf from Wizard of Oz, snaggly Brit-teeth, legs that would horrify even the skinniest chicken, and more tracks than have been laid across Siberia).  Winehouse's Valerie.
That's it for this week. Enjoy your Song of the Week for December 8, 2008.
Posted by On The Flip-Side at 8:03 AM